The Vancouver Seawall is a massive waterfront pathway that wraps around Stanley Park, and other waterfront areas of Vancouver. The path completed construction in the 1980s and has been an important landmark ever since, with thousands of people walking and biking this path along the park every single day. 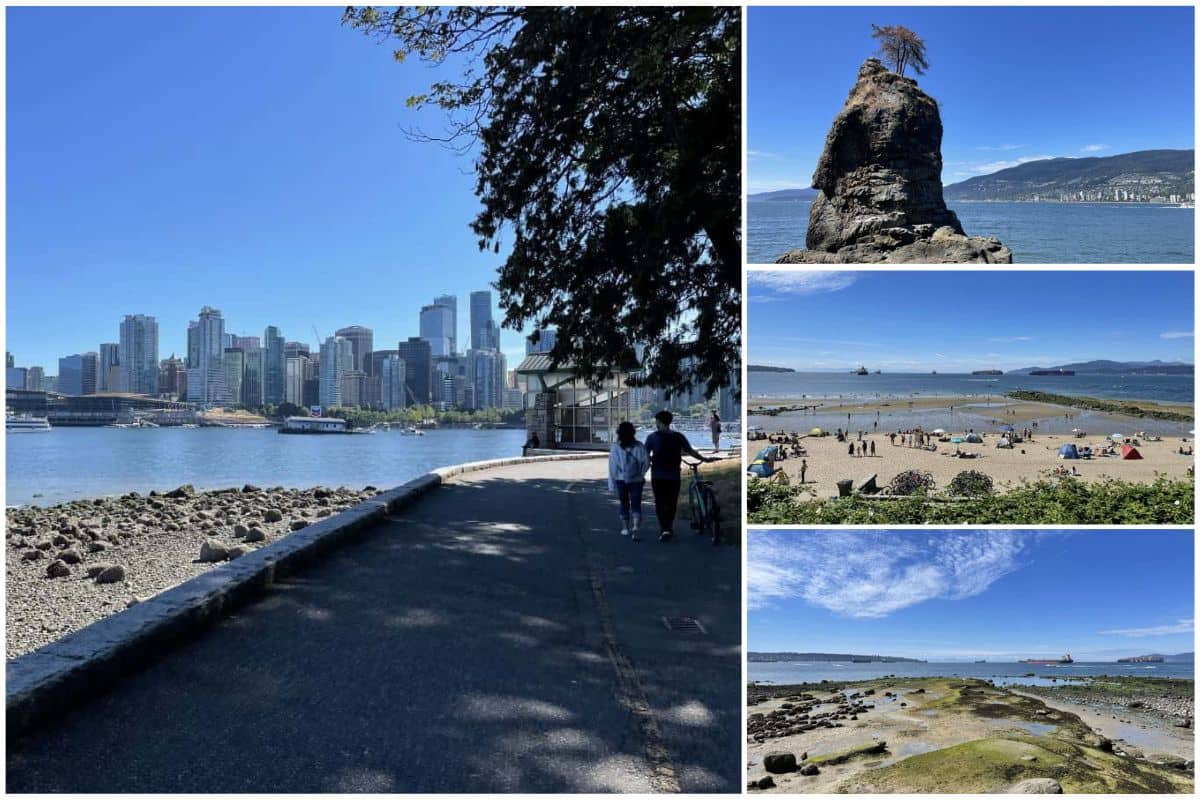 Where is the Stanley Park Seawall?

The Stanley Park section of the seawall begins in Coal Harbour, and wraps around the entirety of Stanley Park, under the Lions Gate Bridge, past Third Beach, Second Beach, and ending in English Bay. You can also start the seawall in English Bay and travel in the opposite direction, ending in Coal Harbour.
See also  Sunset Beach in Vancouver – Everything You Need To Know 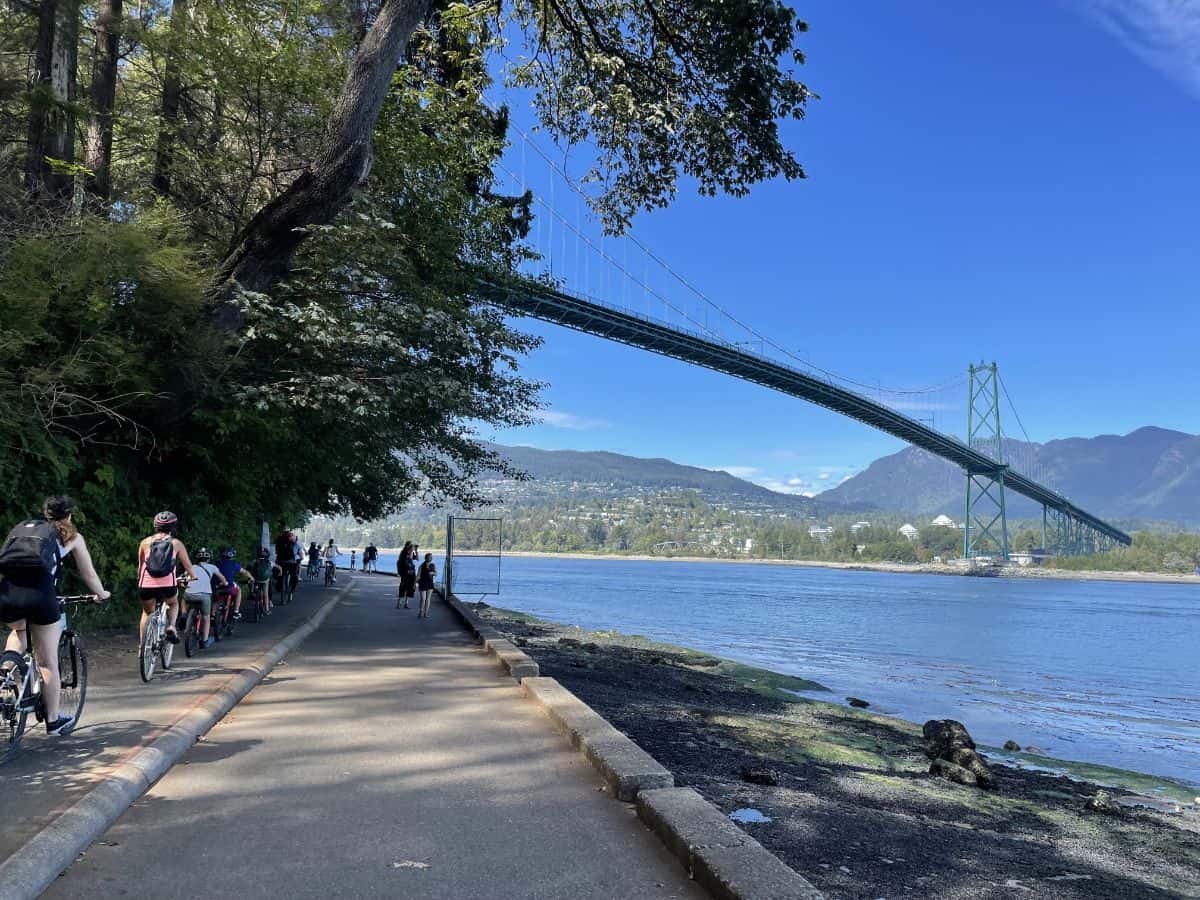 The history of Vancouver’s Seawall

The Vancouver Seawall is the “world’s longest uninterrupted waterfront path”[2] and is 28km in length. Initially built to protect from erosion, the Vancouver Seawall is now a massively popular destination, and connects several neighborhoods across Vancouver. The seawall is occupied by bikers, rollerblades, and pedestrians all year round, but is particularly busy in the summer. Construction began in 1917 by mason James Cunningham[4] and was completed officially in the 1980s, years after Cunningham’s passing. Since its completion, the seawall has been traversed by millions of visitors. 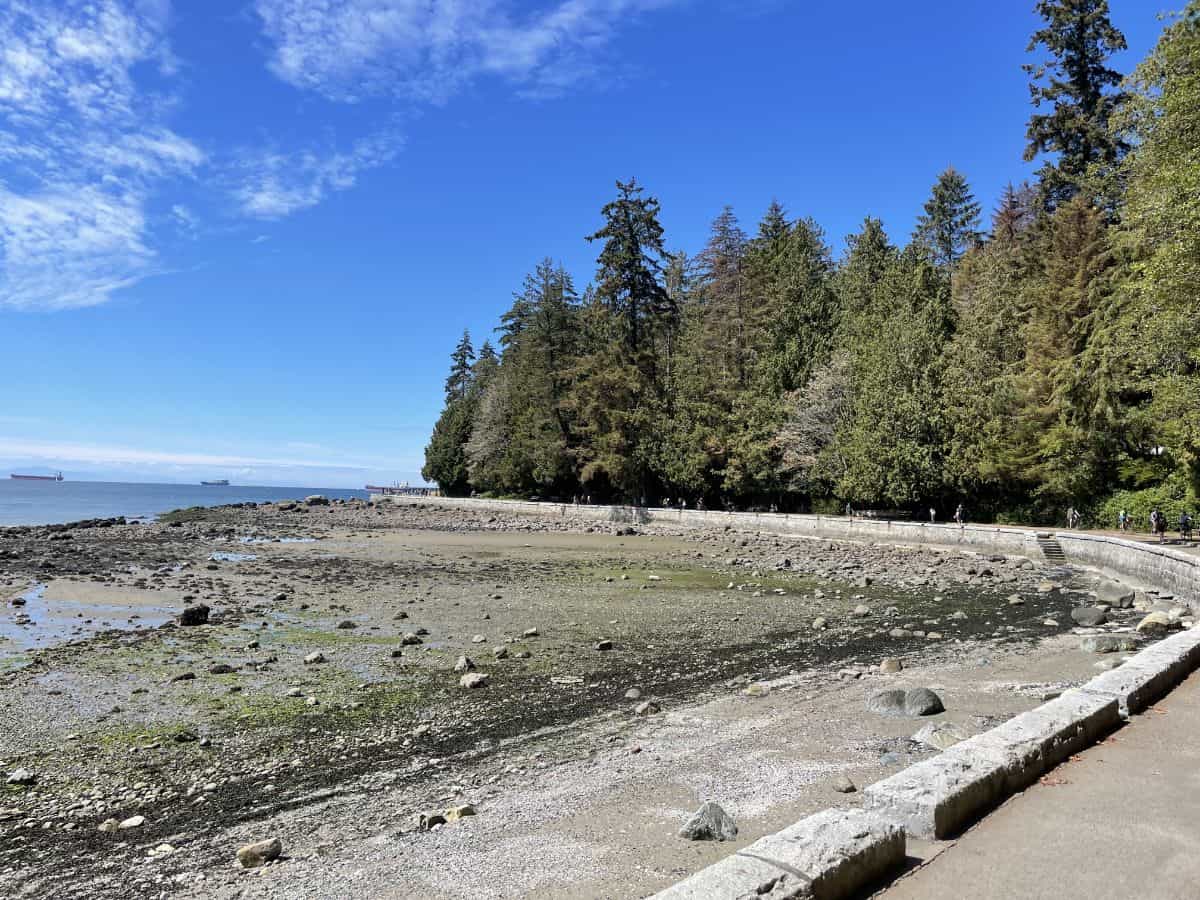 Walking the seawall in Stanley Park

Having been born and raised in Vancouver, I’ve walked and biked the seawall many times, but it had been a while since I took the entire trip around the Stanley Park section. Due to structural damage caused by several rough storms in 2020 and 2021, large sections of the seawall were closed for maintenance. However this year, the seawall is open again, and you can take the journey along the coast all the way around the park, on foot or by bike. 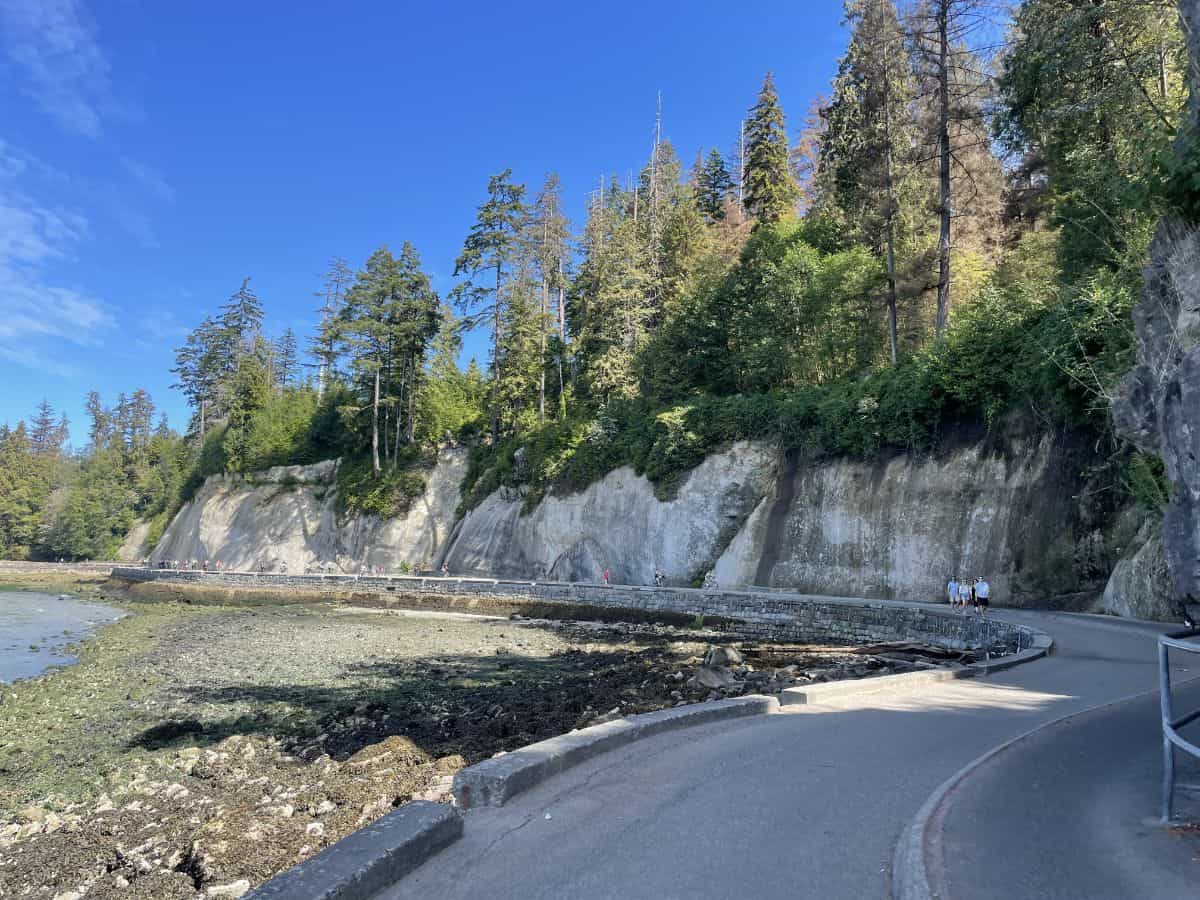 How long does it take to walk the seawall in Stanley Park?

I started my journey at 1 pm from English Bay Beach, and popped out the other side at Coal Harbour at 4 pm, after taking several long photo breaks, a lunch break, and walking at a very leisurely pace. Typically, walking from English Bay, all the way to the start of the seawall at the Vancouver Convention center takes about 2 to 2.5 hours, depending on your pace, and whether or not you take breaks. 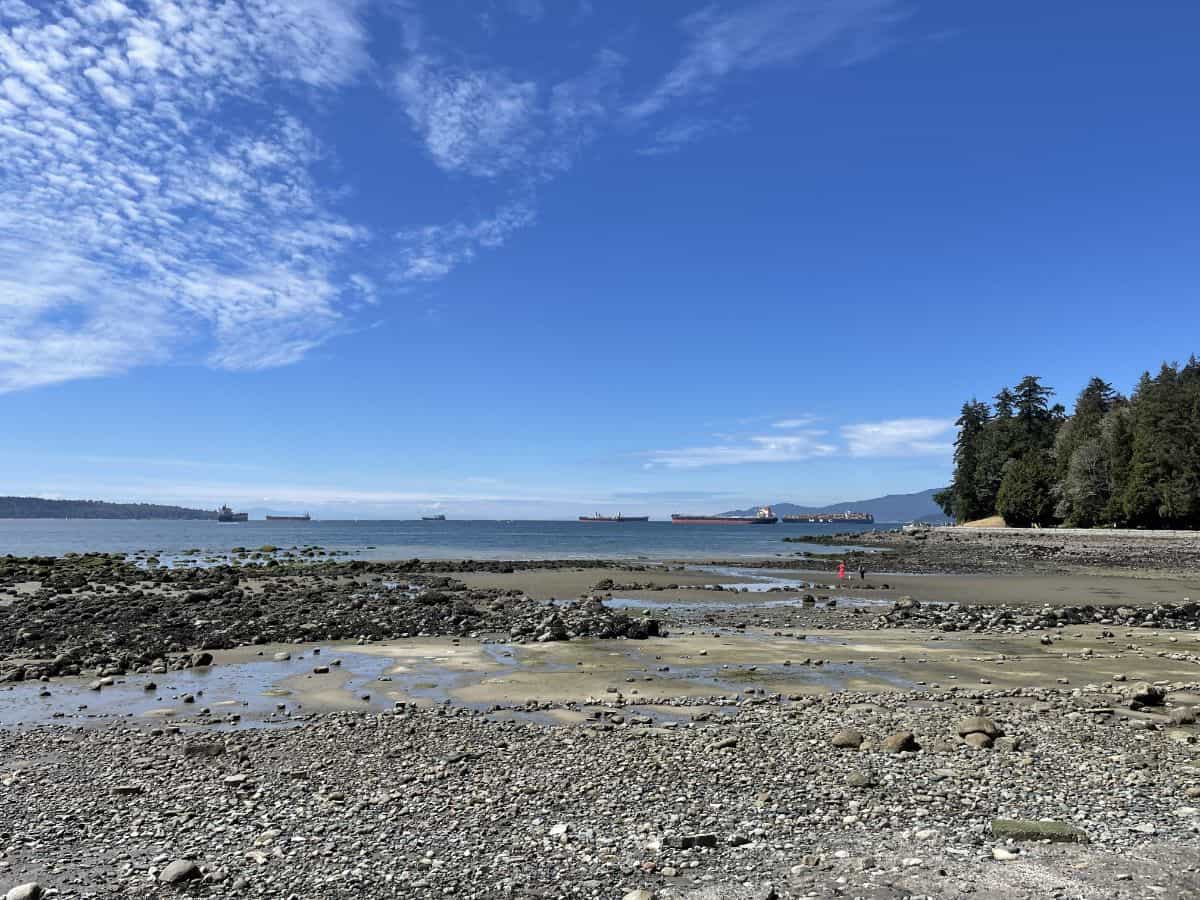 We started our walk at English Bay Beach in Vancouver’s West End, into Stanley Park. We continued north along the seawall, towards Second Beach, where plenty of beachgoers were enjoying the beautiful day. 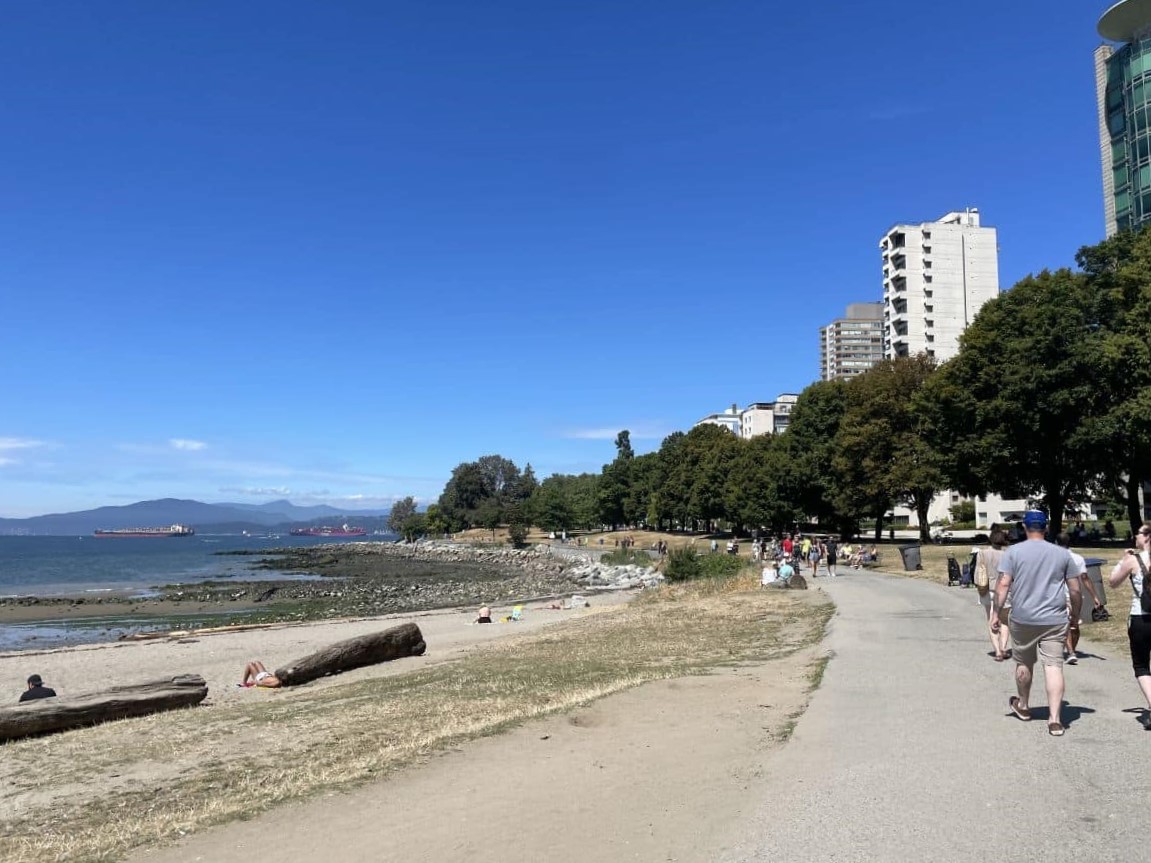 This stretch of the seawall is busy with pedestrians, but the bike lane has been moved to the street, so you don’t need to share the path with bikers or rollerbladers. You’ll get a nice view of the English Bay and across the water to the Point Grey Peninsula. There are many large cargo boats peppering the ocean. 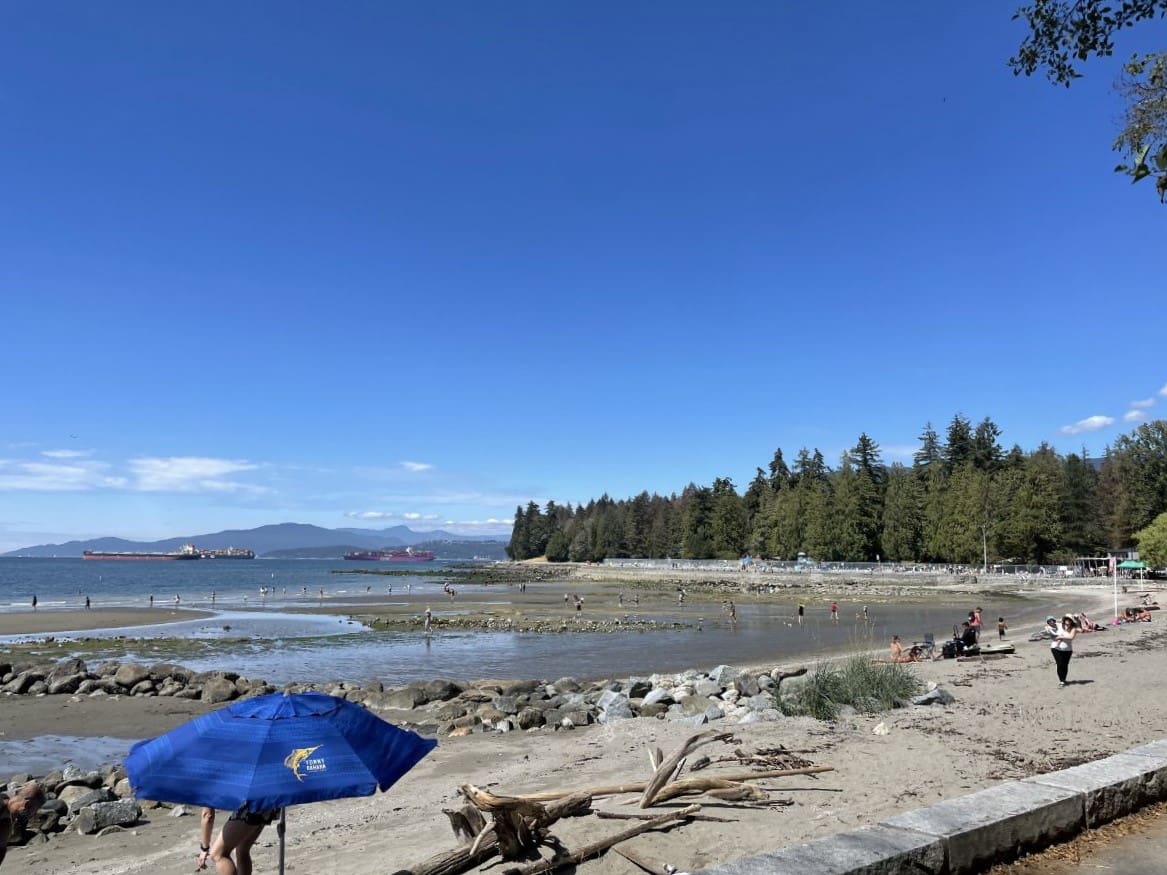 At Second Beach, the bike lane begins, with bikers moving south along the path. The biking and walking paths are divided by a dividing line, but sometimes bikers may spill over. Be sure to stay on the designated walking or biking path for your own safety and the safety of others. 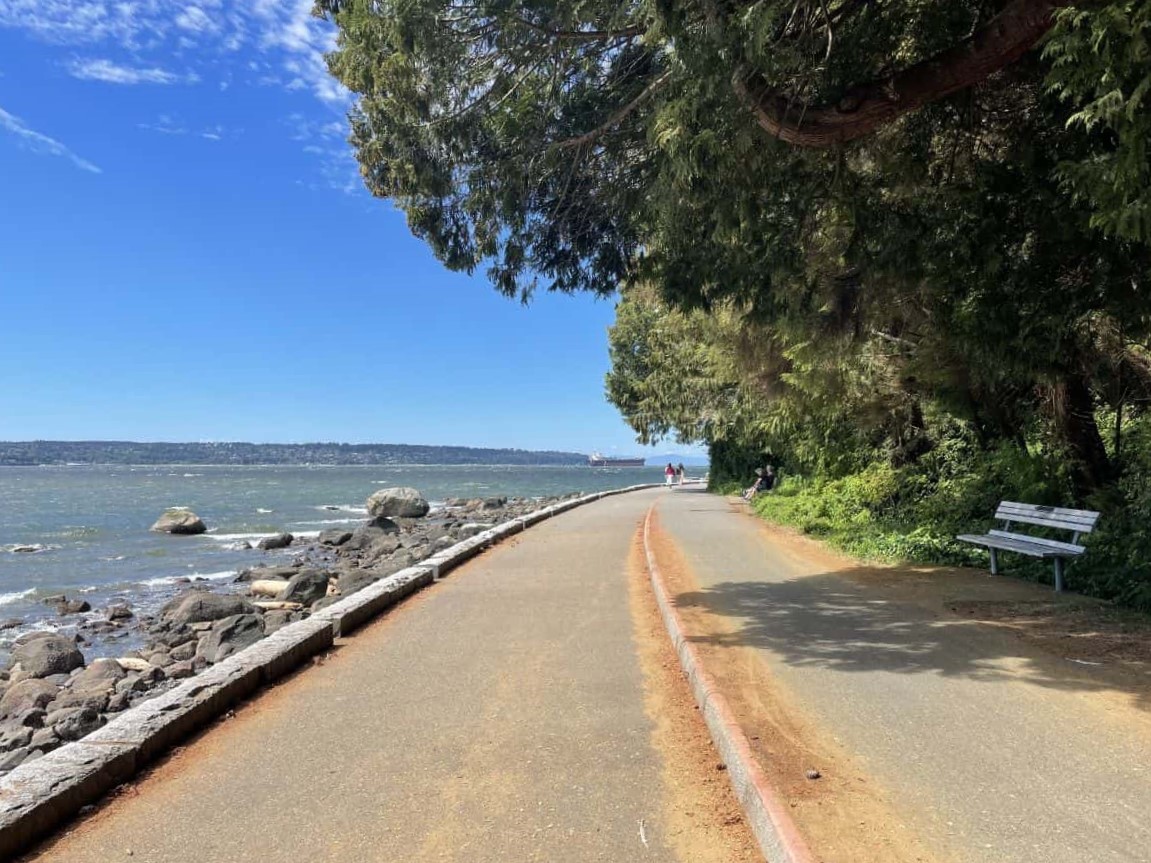 The walk from Second Beach to Third Beach provides a scenic view of the North Shore, and when the tide is low you can see the rock formations on the shoreline, varieties of sea vegetation, and rock sculptures. 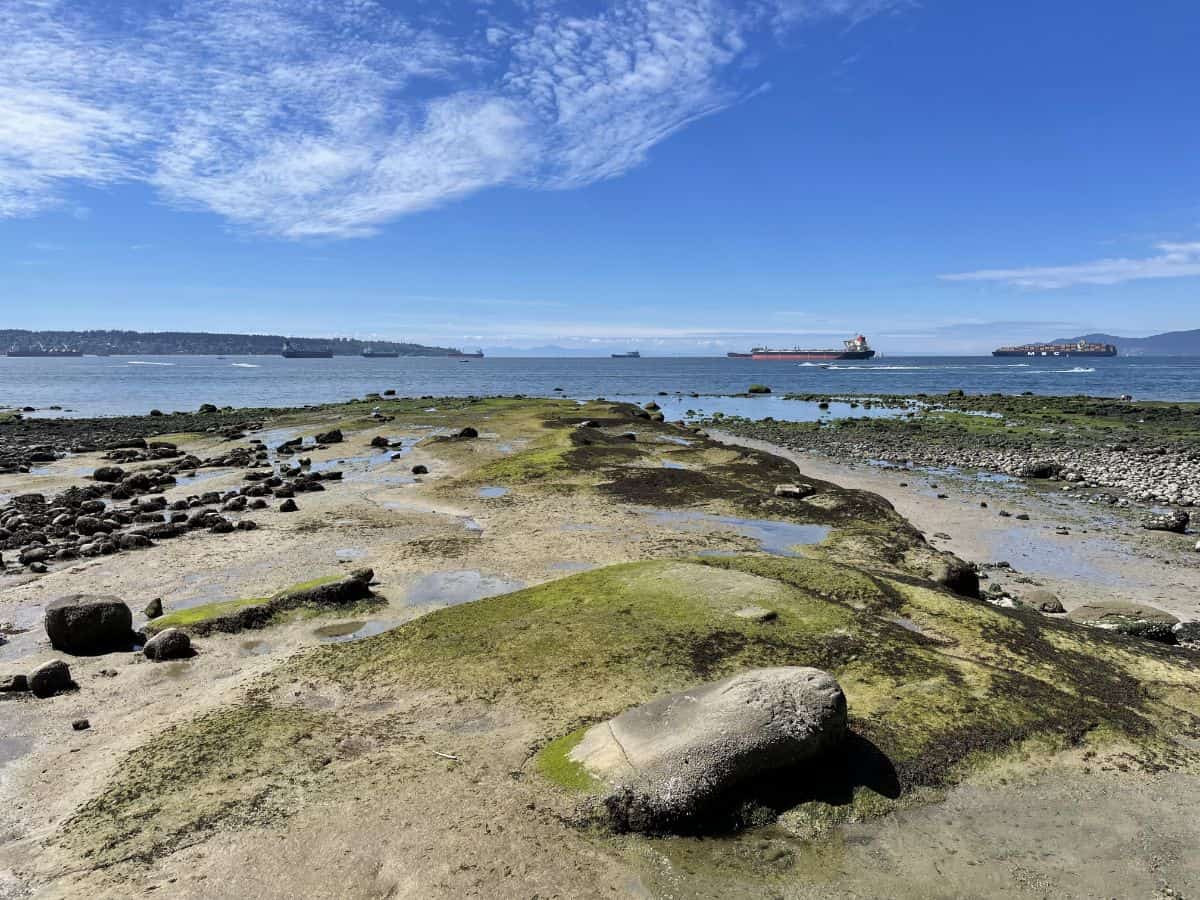 We continued along the seawall to Third Beach which was equally packed with folks swimming and sunbathing. We were feeling ready for lunch when we arrived and decided to stop at the Third Beach concession stand for a bite. 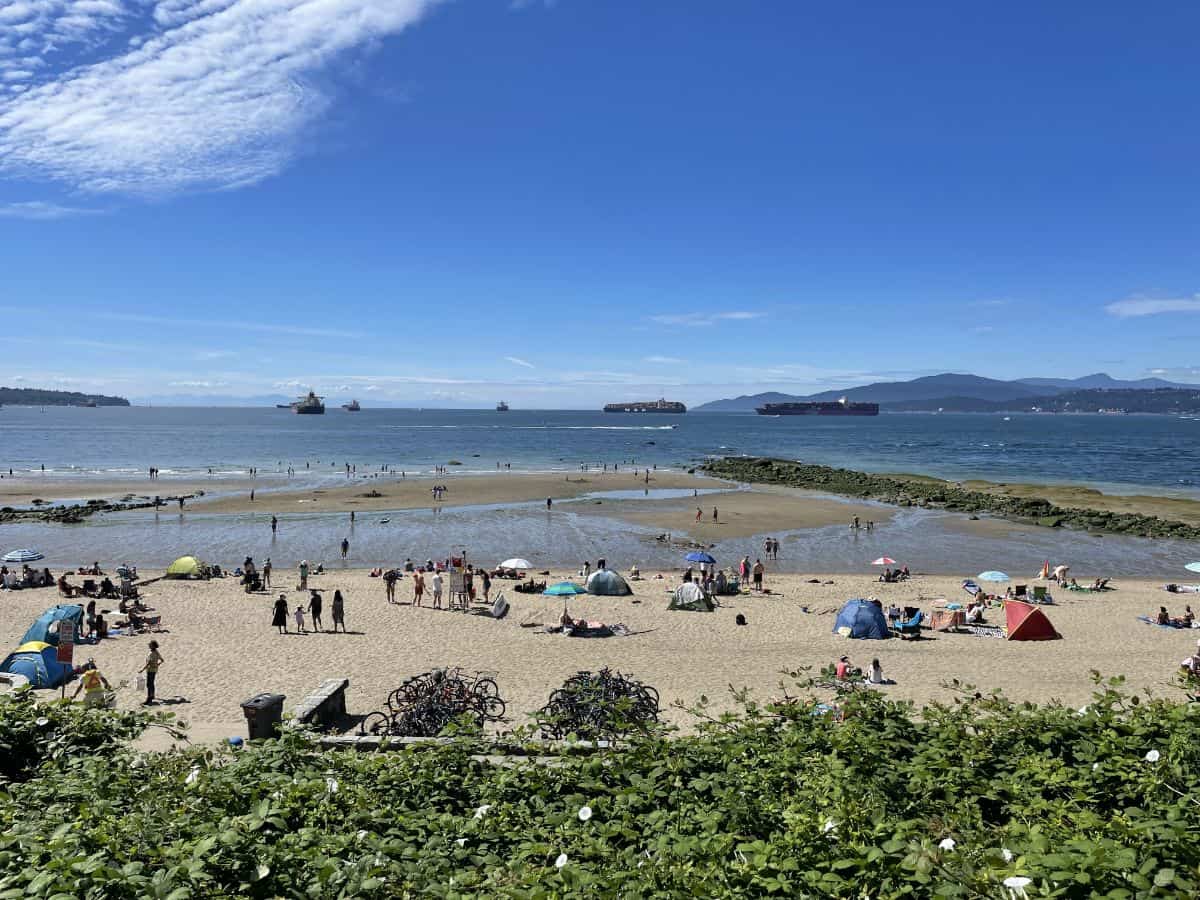 See also  Hayward Lake in Mission, BC – Everything You Need To Know 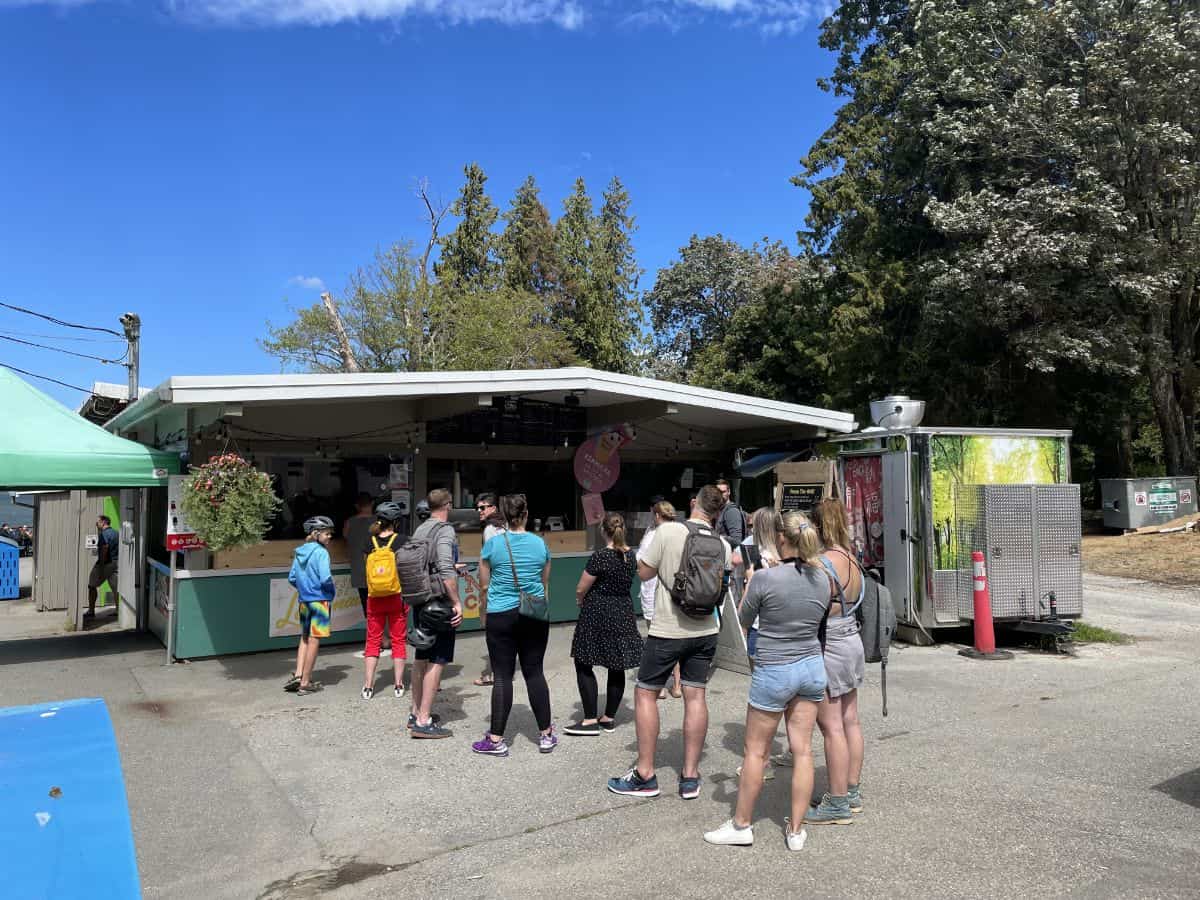 In the summer the lines can be long at beach concessions, so be prepared for a bit of a wait. We ordered some fries, veggie tacos, and kombucha to drink. There are plenty of options to choose from, including vegetarian options, cold drinks, hot food, and ice cream. We found a shady spot in the grass and enjoyed our lunch before we pressed on to complete the seawall. 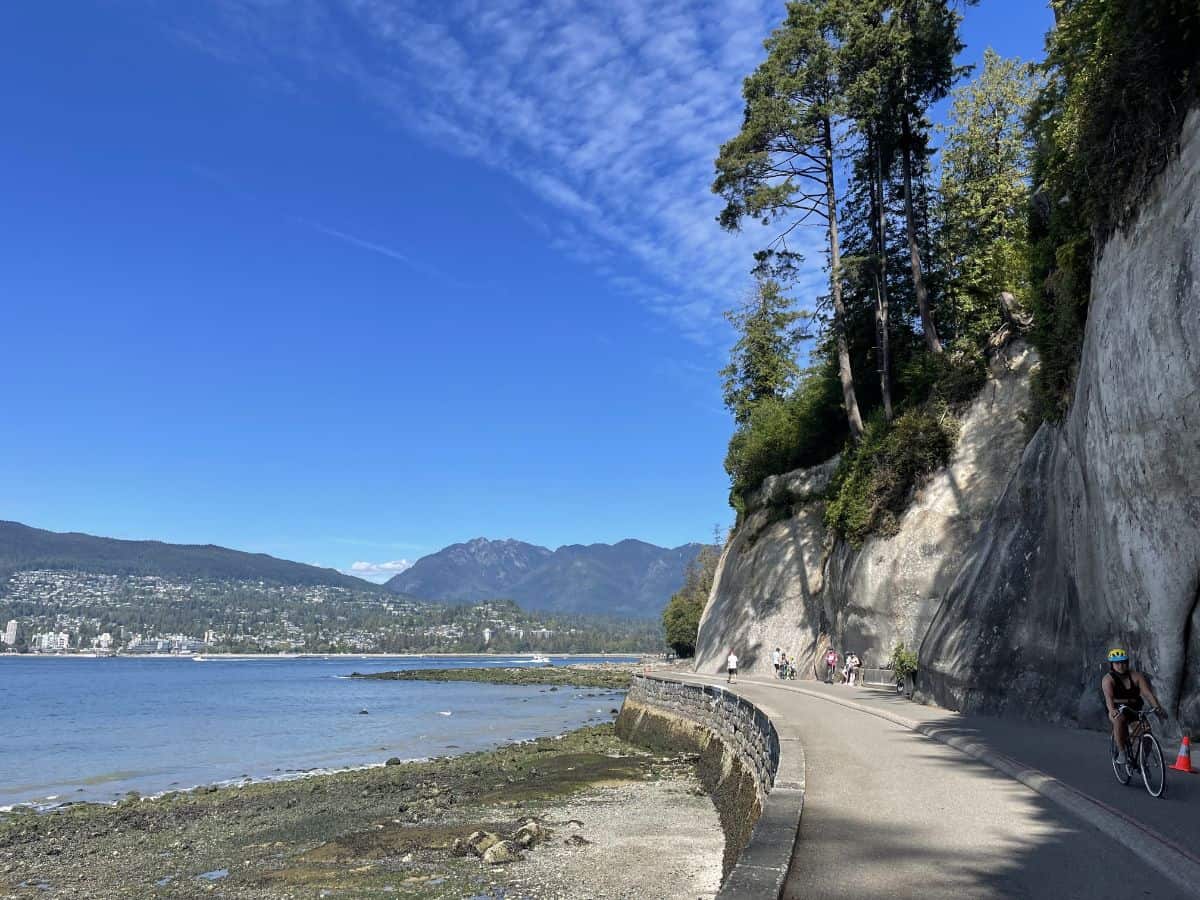 Landmarks along the seawall in Stanley Park

We continued from Third Beach along the seawall, which past Third Beach runs parallel to the shore of West Vancouver across the water. This section of the seawall is up against a huge sandstone cliffside, with views of the North Shore. 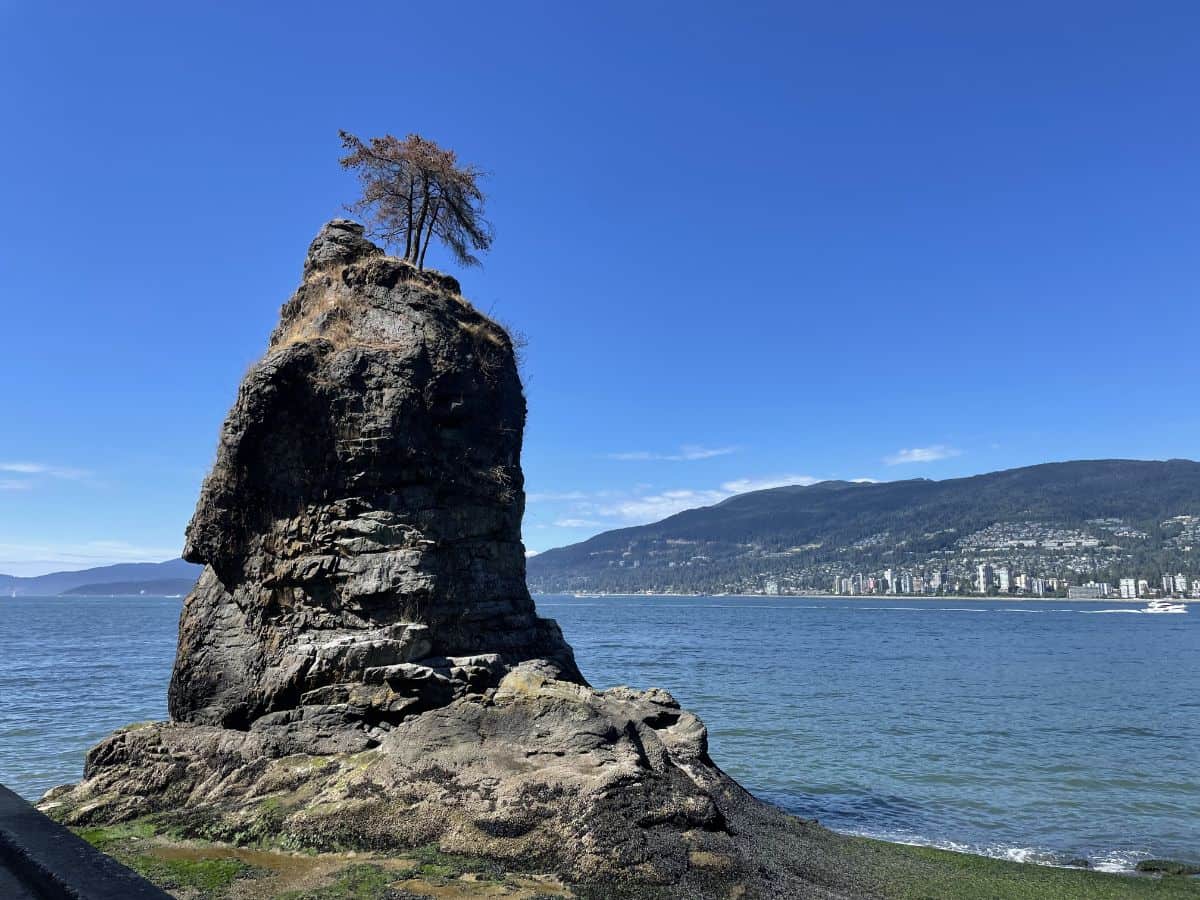 Siwash Rock is a natural landmark along the seawall that holds great significance to the Indigenous Squamish people. Siwash rock is a sedimentary rock outcropping, caused by volcanic activity millions of years ago. Siwash rock is the only rock of this kind in the Vancouver area[5]. 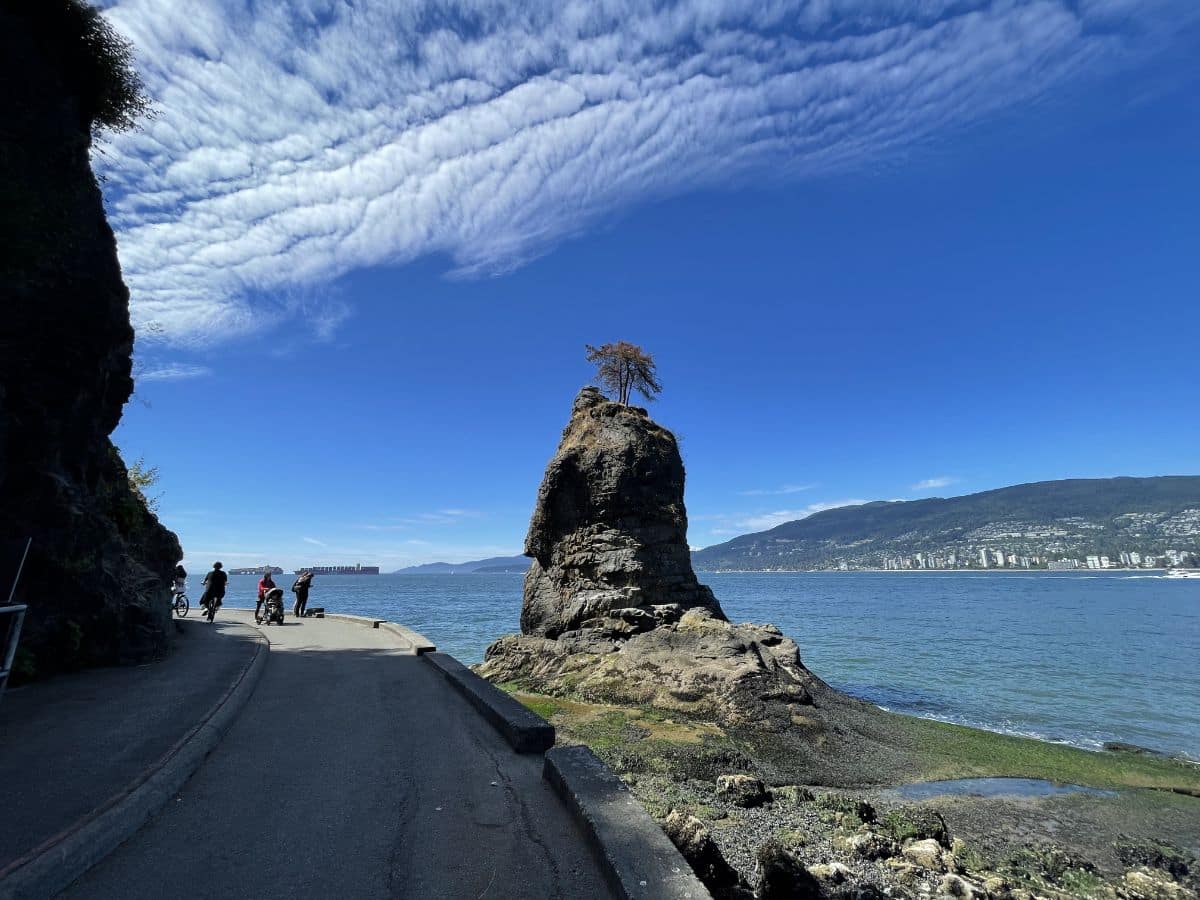 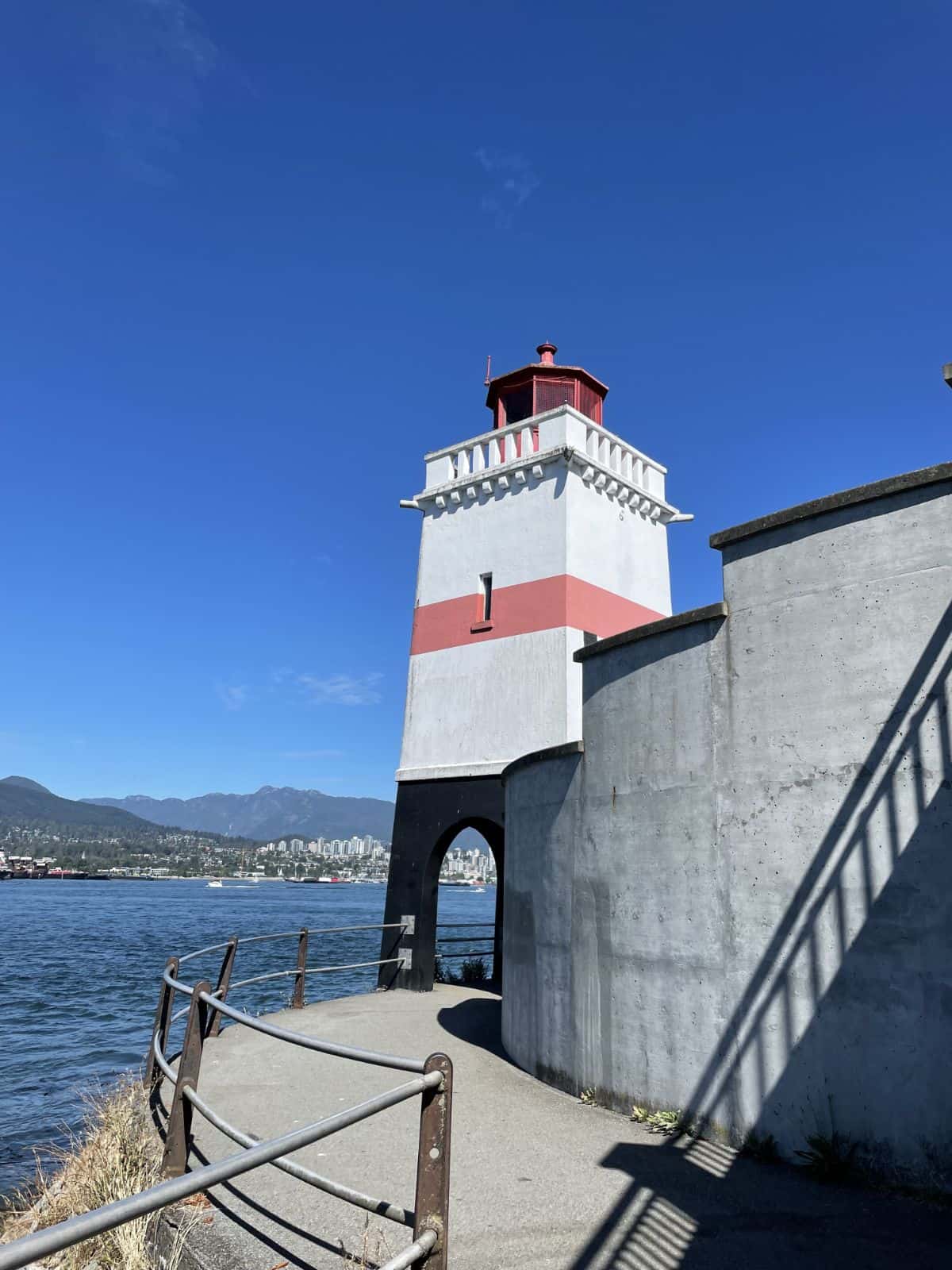 Just a few meters past the Prospect Point Lighthouse is the Lions Gate Bridge, which connects downtown Vancouver to West and North Vancouver. 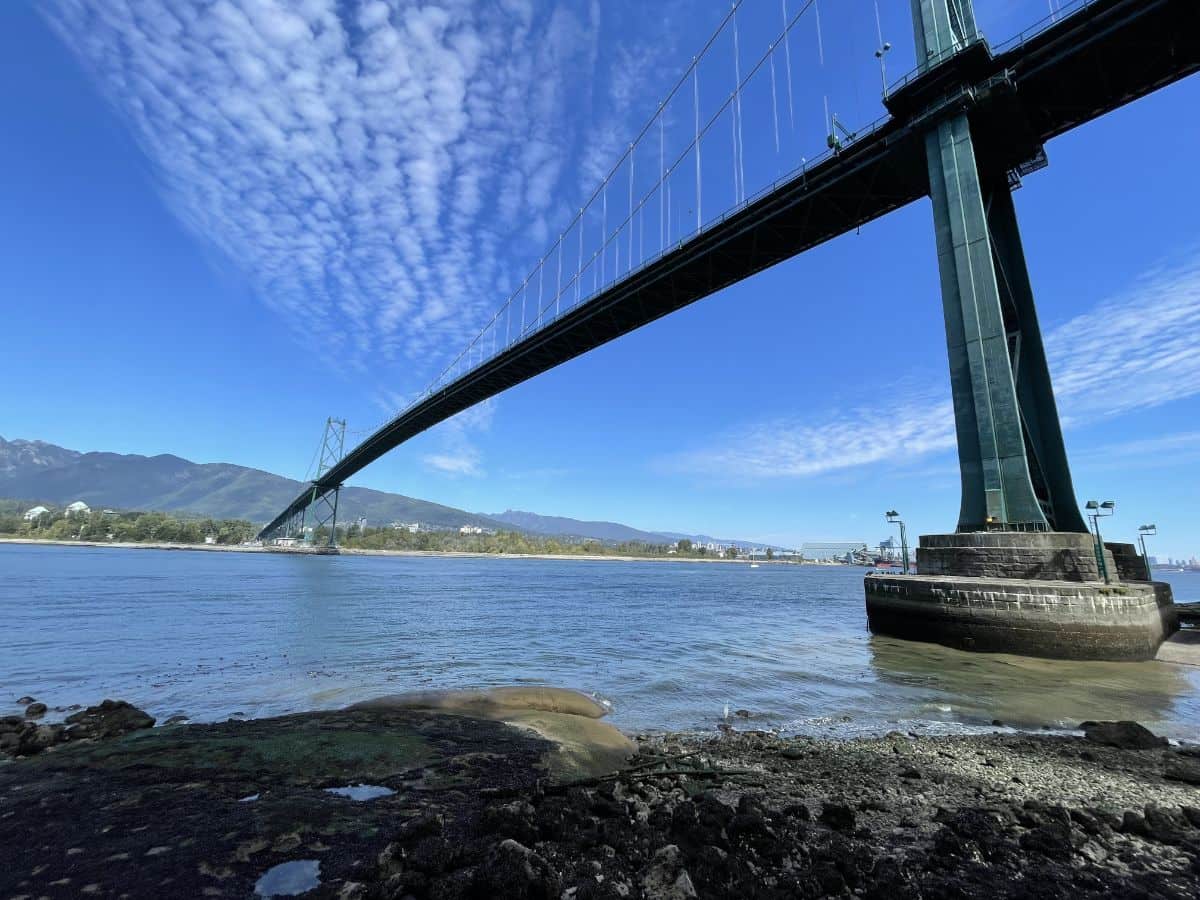 Walking under the Lions Gate Bridge 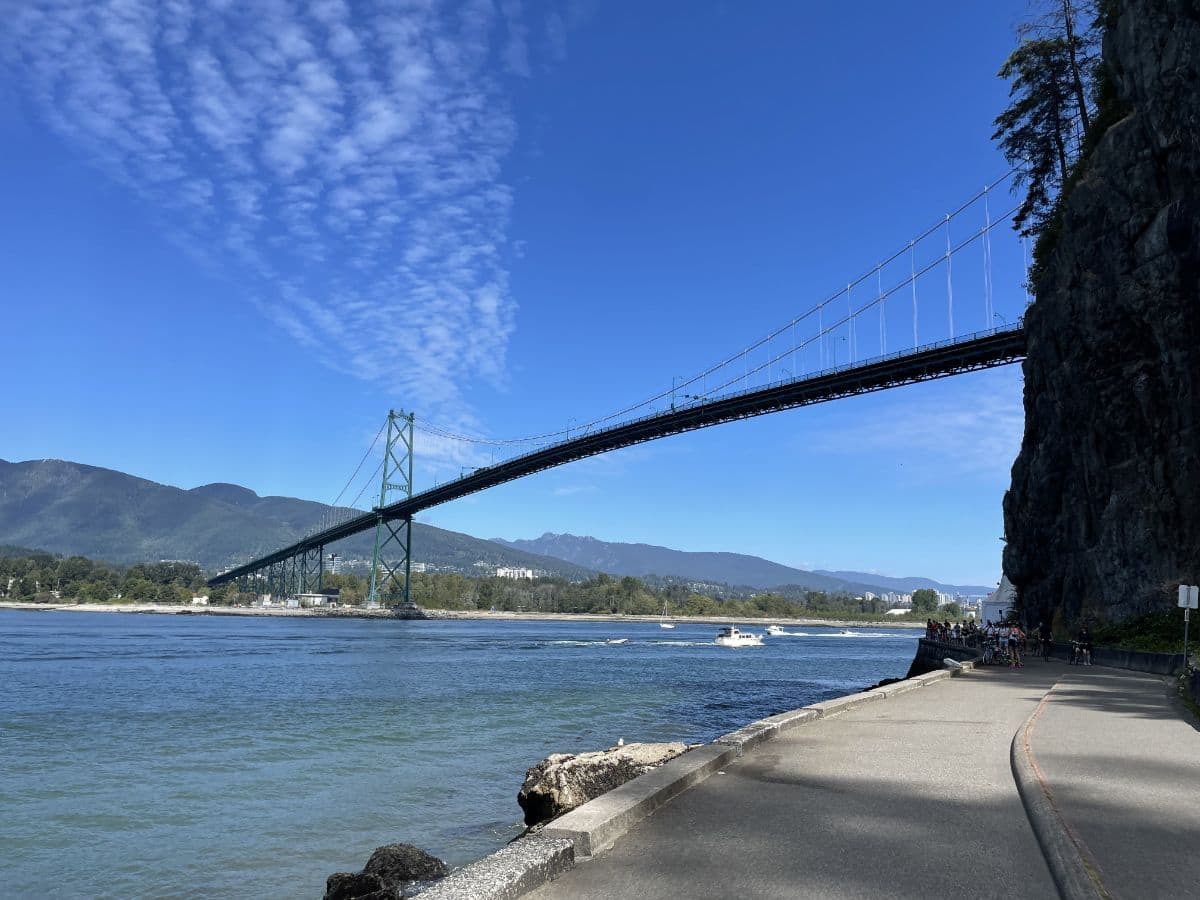 The seawall under the bridge is a popular photo opp, and bikers are required to dismount their bikes during this stretch of path. This area can get very congested in the summer and on weekends, but you get an amazing view of the North Shore, and can get some great shots. 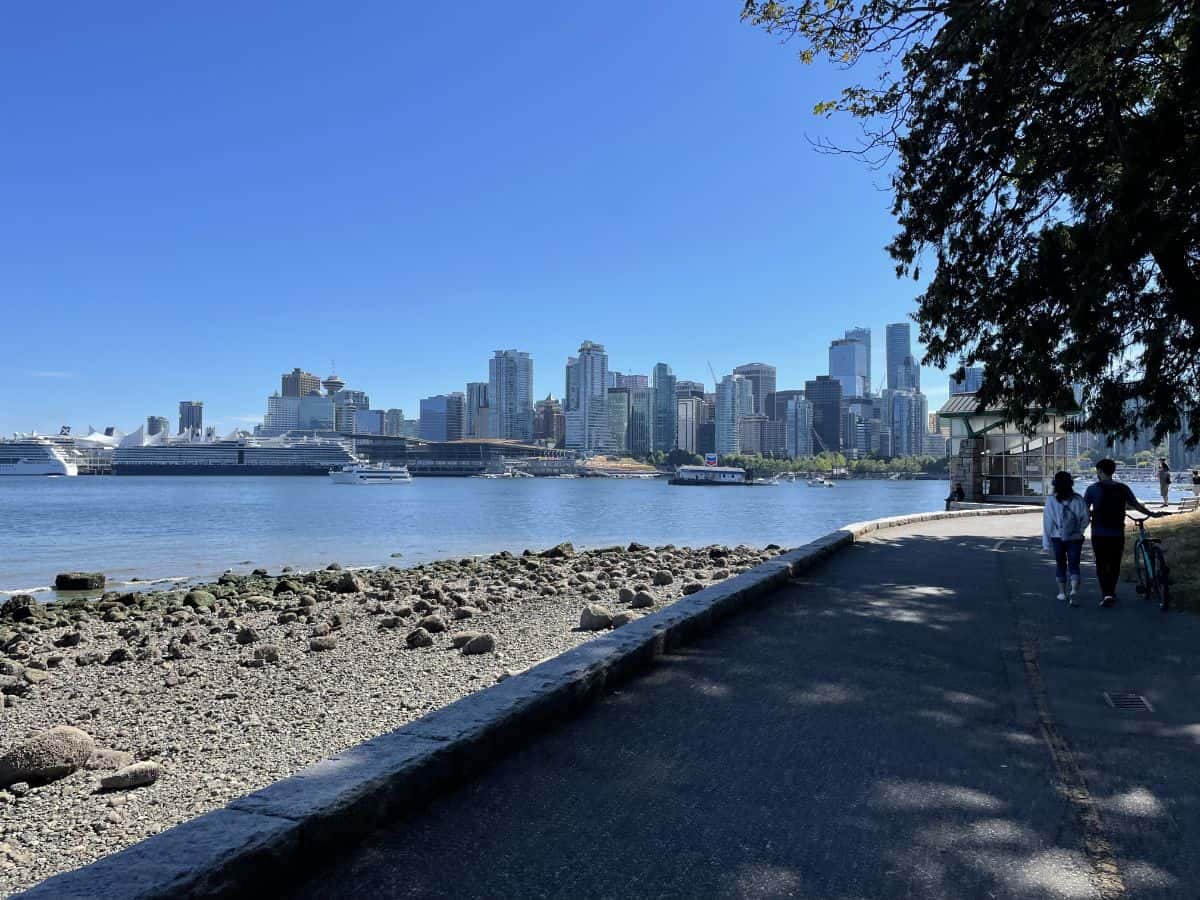 Along the seawall in Coal Harbor is the Nine O’Clock Gun. The Nine O’Clock Gun is a historic naval cannon that fires each night at 9 pm. The cannon was brought to Stanley Park in 1894 “by the Department of Marine and Fisheries to warn fishermen of the Sunday close of fishing”[3]. 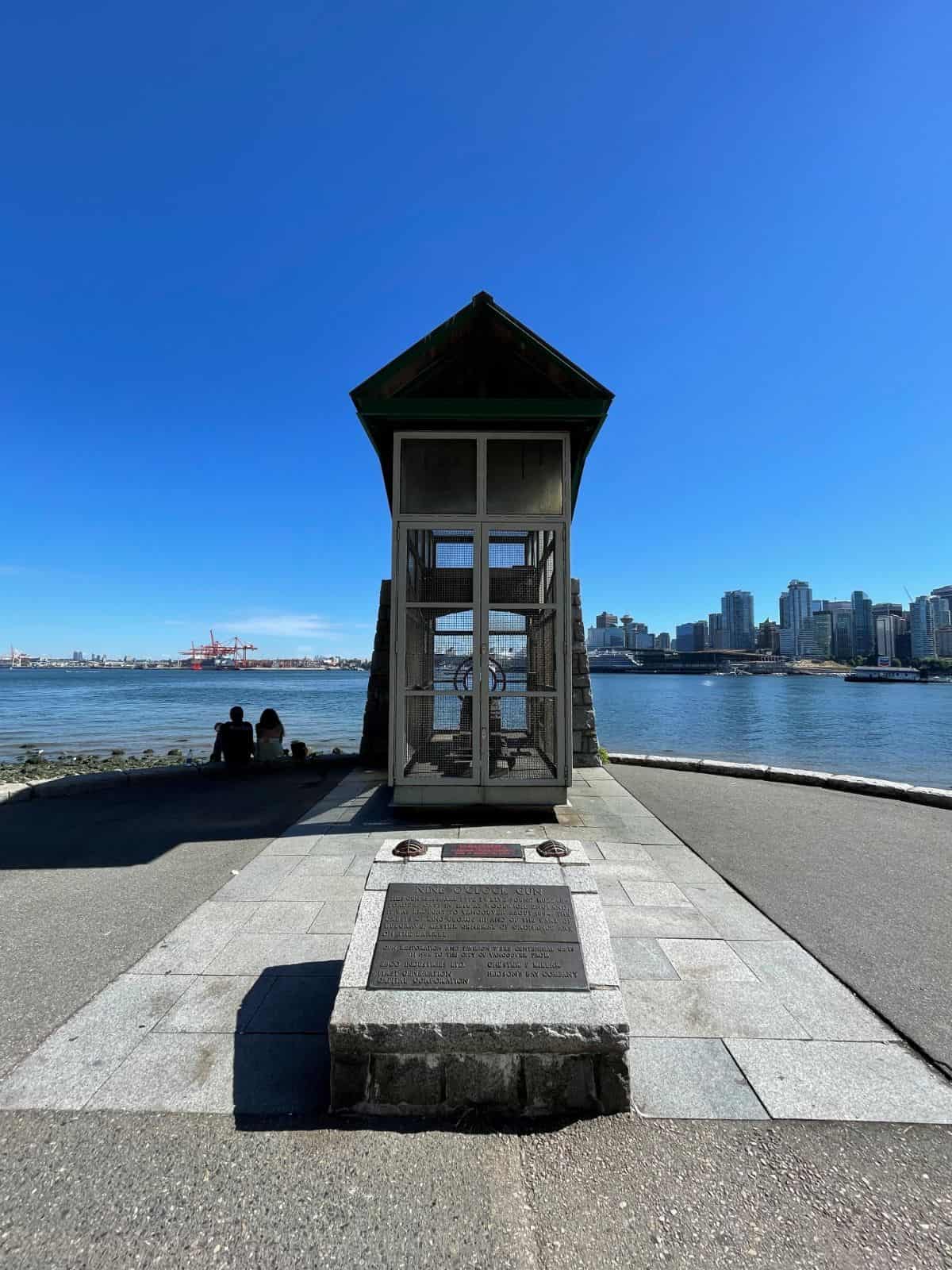 In the last stretch of seawall before approaching Coal Harbor, there is plenty to see. Just past the Nine O’Clock gun is Deadman’s Island. Deadman’s Island is a man-made island that houses a Naval museum, as well as the Naval Reserve. The island is closed to the public, but it sure looks great in photos. When we passed by Deadman’s Island the tide was very low but is usually surrounded on all sides by water, with a bridge connecting it to the seawall. 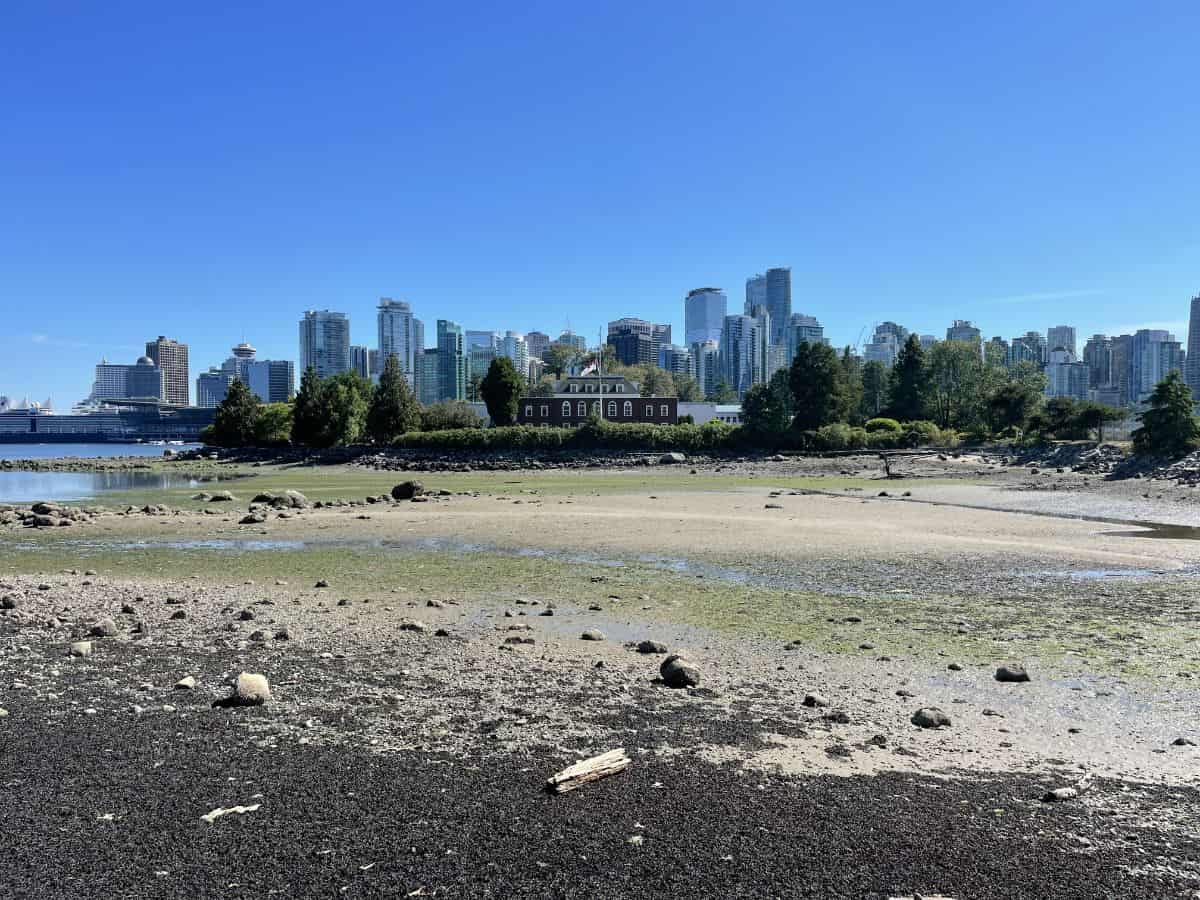 We also passed the Vancouver Rowing Club as we continued our way along the seawall. The Rowing Club was built in the early 20th century and is a members-only club for a number of sports, including rowing. 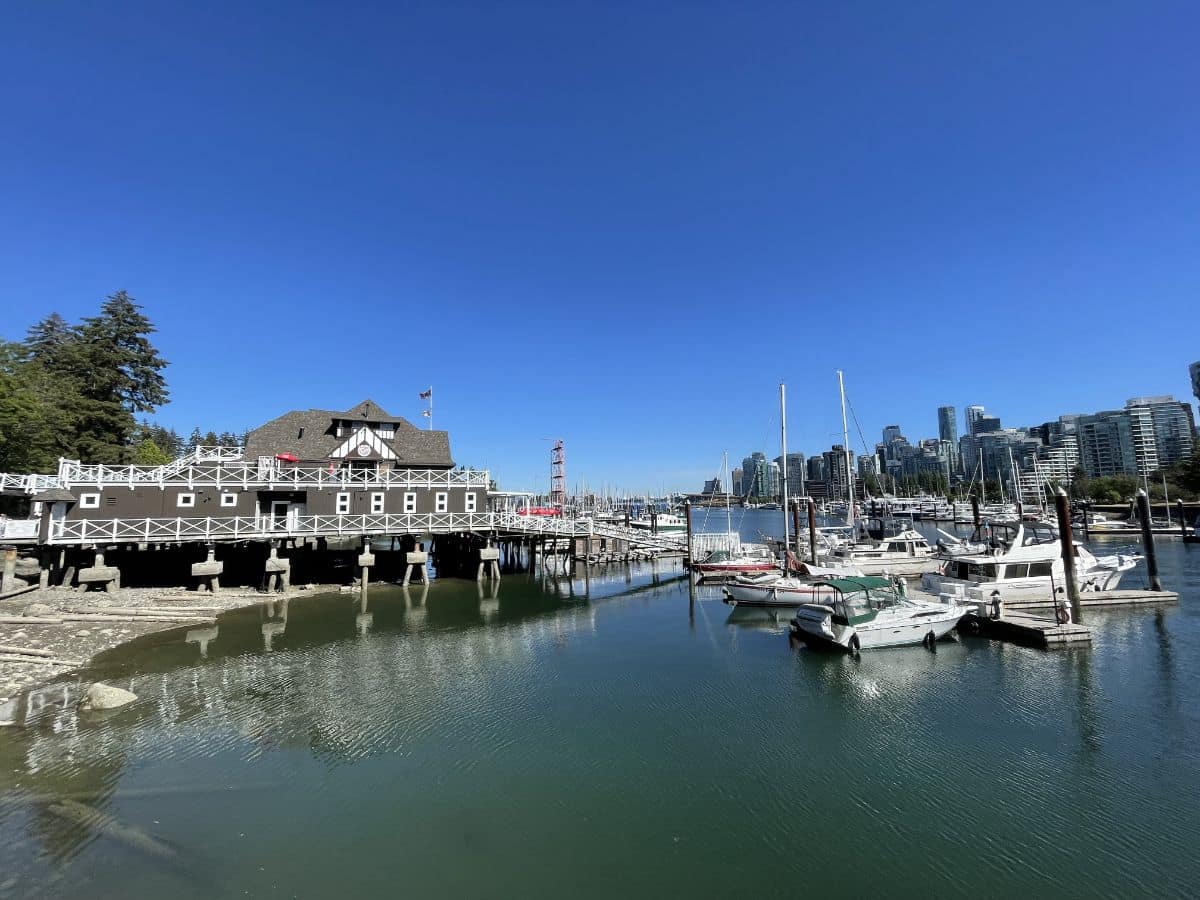 The Seawall in Coal Harbour

The Seawall in Coal Harbour is a very scenic section, with views of the Vancouver convention center, the downtown skyline, the boat docks, and even float planes taking off and landing from Harbour Air. On the seawall just before the Rowing Club, there is an information booth and concession stand, as well as a number of trailheads leading into Stanley Park. 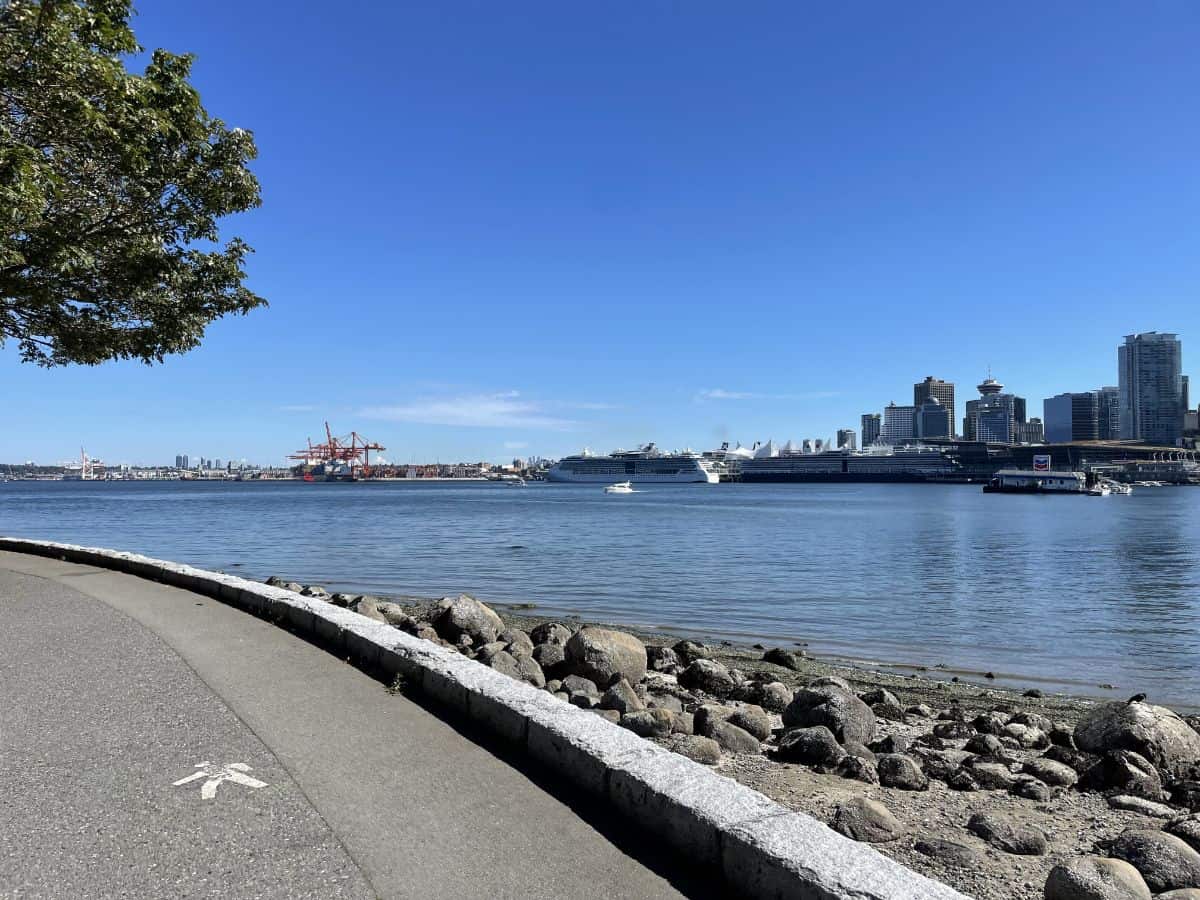 FAQ’s about the Stanley Park Seawall:

Is the seawall a difficult walk?

No, the seawall is not difficult to walk. Walking the entire seawall around Stanley Park on average takes about 2 hours, but there are plenty of shortcuts along the way to shorten the time. The entirety of the seawall is also wheelchair and stroller accessible.

Is there concession along the seawall?

Yes, there are concession stands located in Coal Harbour at the information center, Third Beach, Second Beach, and English Bay.

Are there public restrooms?

There are public restrooms located at every concession stand.

Is the Stanley Park Seawall busy?

In the summer, and on holidays the seawall gets very busy, especially for bikers. Many people rent bikes in the summer to take the trip, which can cause a lot of congestion on the narrow bike paths. If you bike the path on a nice summer day, or a holiday, be prepared to go at a leisurely pace. There are rarely any delays for pedestrians walking the seawall, though you can expect to share the path with many others. 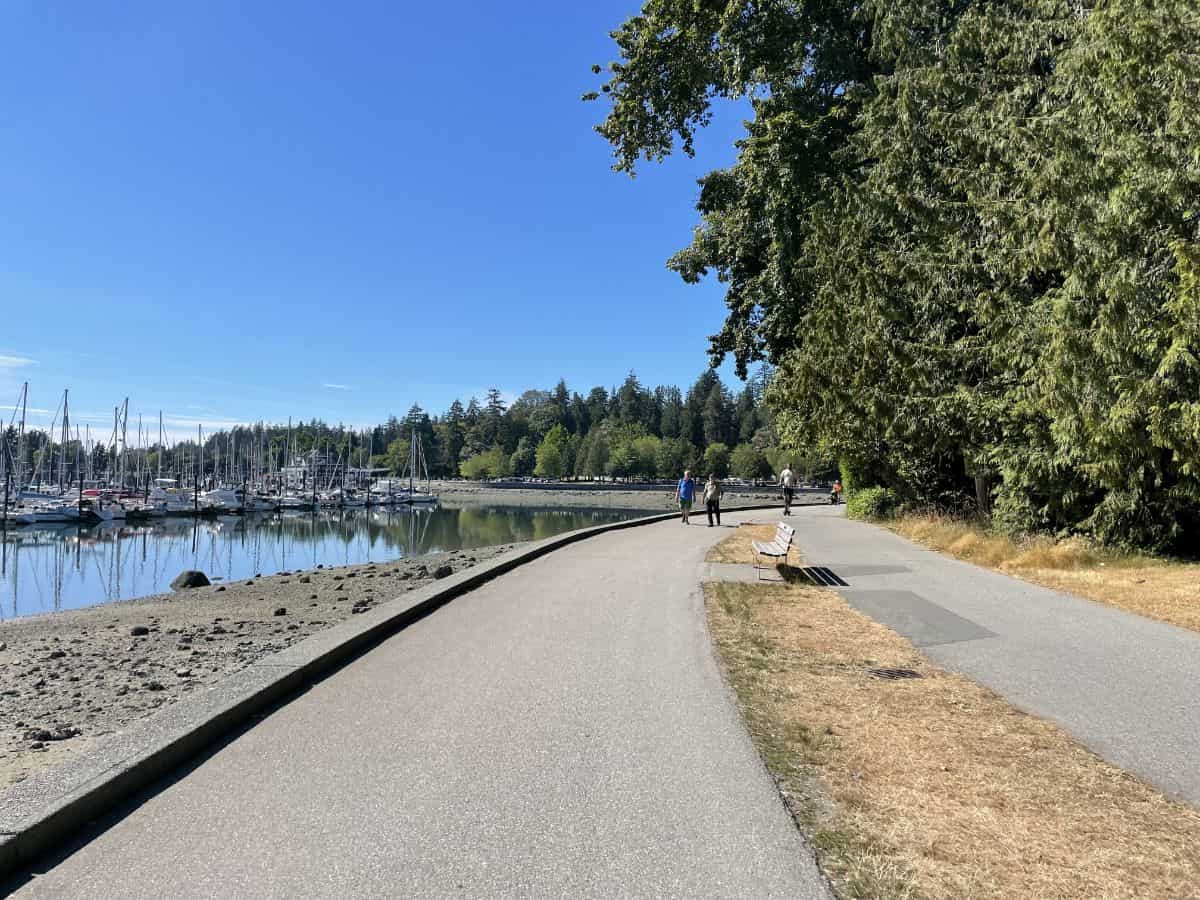 I’ve lived in Vancouver my entire life, and yet every time I walk the seawall I am reminded of how lucky we are to have it. The section of the seawall that outlines the entire perimeter of Stanley Park has some of the most scenic views in all of Vancouver. The walk is easy to complete, with lots of stops along the way to eat or enjoy a view. The seawall can be seriously busy in the summer and on holidays, especially for bike riders, so if you plan on biking, try to go on a weekday, or be prepared to take it slow. For pedestrians, there is usually no hold-up. You can see a striking amount of Vancouver’s natural beauty just by taking a 2-hour walk around the Stanley Park Seawall.